Attorney Caraquel understands the complexity and the challenges of going through the US immigration process as he was once an applicant. He initially entered the US as a tourist in October 2007. He obtained his multinational executive (L) visa through the US embassy in Hong Kong and worked as an Industrial Engineer (IE) in Mt. Sterling, Kentucky. He obtained his green card after nine months, and his US citizenship a year later.

He moved to Morris Plains, New Jersey when he was promoted in his IE job. He then pursued his legal career after he passed the 2012 New York bar examinations and was successfully admitted to the New York State bar in June 2012. After taking his oath, he started his immigration work. He moved to Queens, New York in January 2017.

New to the community, he provided pro bono services to the Filipinos in New York and New Jersey while his humble life’s journey (from a Banana Cue street vendor to the New York bar) went viral around social media at the same time period. His excellent practice in immigration law was consistently being recognized as evidenced by the awards he received. In 2018, he was awarded as one of the “Outstanding Filipinos in America” (TOFA) and was the recipient of the 2018 Presidential Awards for Filipino Individuals and Organizations Overseas – Pamana ng Pilipino. The honor was given to Atty. Caraquel by Philippine President Rodrigo Duterte in recognition of his outstanding professional talents in the field of immigration law and his generosity in offering pro-bono legal services to the Filipino communities in New Jersey and New York.

Attorney Caraquel is licensed to practice law in both jurisdictions of the Philippines and the State of New York! 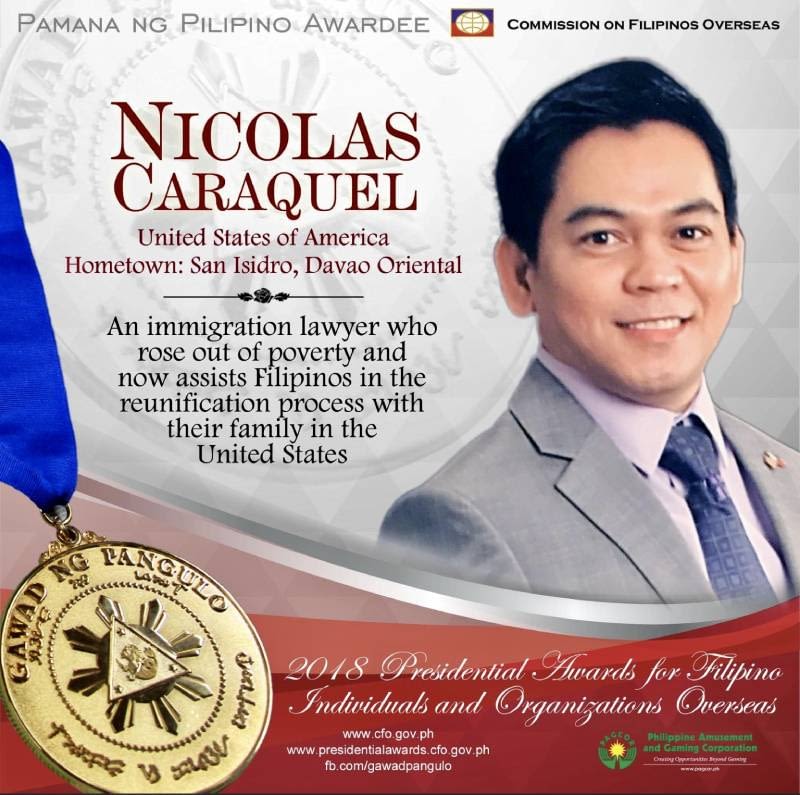 NY immigration lawyer was a child street vendor in Davao

Most people around the world dream about visiting, working in, or living legally here in the US, hence, the concept of iDreamAmerica was born. iDreamAmerica is the official website used by the Law Offices of Nicolas Caraquel, PLLC.

Our processing center is located in Toril, Davao City in the Philippines. The firm is officially registered under the name of iDreamAmerica Davao OPC.

The fiancée (K1) visa allows US citizens (USC) to bring his or her fiancé(e) and their minor, unmarried children below 21 yrs. Old to the US. The US citizen petitioner and the fiancé(e) beneficiary must have met in person within the last two years to be eligible to file a K1 visa. More.

The spouse (CR1/1R2) visa allows US citizens (USC) or Legal Permanent Residents (green card holders) to bring his or her spouse and their minor, unmarried children below 21 yrs. old to the US. More.

US Citizenship or Naturalization